Jani-King of Greensboro, a master franchise regional office of Jani-King International, is excited to announce that local unit franchisee Tyrone Tyson was recently featured as the cover story in the August 2010 issue of Black Business Ink magazine, a business publication targeting the Greensboro, NC market.

Tyson, also a pastor at Freedom Baptist Church, looked to Jani-King when his former employer forced a schedule change that didn’t match his priorities.

“The new schedule interfered with church, that was the main factor, so I took a leap of faith,” he says. “I believe in God before I believe in any job.”

Initially, Tyson left his full-time job and took a position as a worker for a friend who owned a Jani-King franchise. Over the next year, Tyson picked up trash while gaining valuable insight into the commercial cleaning industry and Jani-King franchise opportunity.

Tyson purchased the Jani-King franchise from his short term employer two years ago. Less than a year later, his franchise was offered a janitorial account at the new BB&T Ballpark in downtown Winston-Salem.  Since the beginning, Tyson has relied on the support of Jani-King’s regional office including bidding accounts such as the ballpark.

“That’s one of the good things about the Jani-King franchise. On many projects the regional office handles the bidding process,” Tyson says. “They provided the opportunity; all I had to do was be prepared to take advantage of it.” 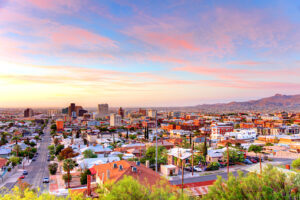 El Paso is a city in and the seat of El Paso County, Texas, United States. It is situated in the far western corner of the U.S. state of Texas. El Paso stands on the Rio Grande river across the Mexico–United States border from Ciudad Juárez

According to the University of Texas at El Paso’s Borderplex[...]