The coveted Franchise of the Year award was announced at Jani-King Gulf Coast’s annual convention, with this year’s event taking place in late March at the Beau Rivage in Biloxi, MS. Franchisees from throughout the Gulf Coast regions attended the convention to take part in ongoing training and education sessions as well as the prestigious awards banquet.

A total of eight Jani-King franchises from the Gulf Coast regions were nominated for ‘Franchise of the Year.’ The eight finalists were treated to a private dinner prior to the awards ceremony, where the top franchise would be crowned the winner. The winning couple expressed their gratitude and shared with us their keys to success.

"It’s about hard work, customer service and building relationships with our clients," said Cindy. "We are a family business and treat our customers like they’re part of the Jani-King family."Highly respected by their peers including Jani-King’s support staff, Cindy and Danis exude a spotless reputation for service with a smile. "They always go above and beyond for their clients," says Jani-King Regional Director, Walter Arceneaux. "One of the many strengths of Cynergy Alliance is Cindy’s excellent communication skills and the relationships she develops with her customers. As active members of a local BNI Group, a professional networking and referrals organization, Cindy and Danis work very hard to connect with their local community." It’s this spirit and commitment to providing outstanding service that prove Cindy and Danis to be deserving of this high honor.

About Jani-King Gulf Coast:
Jani-King Gulf Coast is the largest domestic Master Franchise represented within the Jani-King system. With 500 franchise owner/operators serving thousands of customers, Jani-King is without question the undisputed ‘King of Clean.’ Our strategic network of 10 regional offices along the Gulf Coast, provide ongoing support to our franchisees, allowing them to deliver superior commercial cleaning services.

Many times, a member of our Jani-King family does something[...] 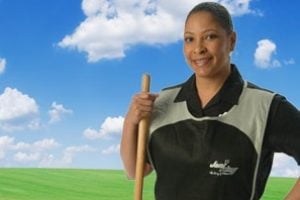 Focused On The Green Clean

With an increasing focus on environmental issues, more and more[...]