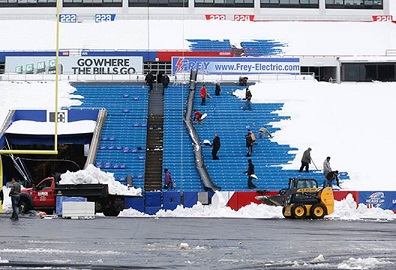 A record breaking snow storm created emergency situations for two Jani-King regional offices. When a massive lake effect snowstorm dumped over six feet of snow in Buffalo during the week leading up to a home game for the Buffalo Bills, Jani-King was asked to jump into immediate action and help the Bills dig-out Ralph Wilson Stadium. However, standing in their way was a mountain of snow that blanketed the Buffalo area and created a city-wide driving ban,making it impossible to get to the stadium for several days.

By Thursday night, two days after the first snow fell and before the driving ban could even be lifted, the NFL made the decision to move the game out of Buffalo to Detroit due to public safety concerns. While that decision allowed the Buffalo regional office to finally take a breath from their enormous snow-shoveling preparations, including hiring 500 stadium workers, Jani-King of Detroit was put on the clock to get Ford Field prepared for an unscheduled game.

“There was already a scheduled event at Ford Field over the weekend, so the franchisee and crews had to work quickly to get Ford Field ready for the football game on Monday night,” said Al Patino, Executive Director of Development at Jani-King International. “Once we knew the game was going to be held in Detroit, our franchisee developed a plan for ensuring the work would be completed on-time. Because we’ve been a partner with the Lions for several years, we know the preparations and cleaning demands at the stadium and everyone did a fantastic job on short notice.”

Back in Buffalo, the Bills clearly weren’t the only ones affected by the storm. The entire city was under four to six feet of snow, shutting down roads and businesses for several days and forcing customers and franchisees to wait at home for some relief from the storm.

According to Bob Griffin, Regional Sales Manager for Jani-King of Buffalo , the driving ban covered well over 60% of Erie County and totaled 19 towns and villages. “The affected areas are where over 60% of our clients are located,” said Griffin. “We had several franchise owners who were snowed in for a week and experienced over six feet of snow in their driveways and on their roofs. All franchise owners in the affected areas were contacted to ensure all was well with them.

“The driving bans were especially difficult for everyone due to the inability of the population to get around and to be able to acquire much needed supplies and medication,” said Griffin. “The interstates and major highways were closed as well, thereby compounding the many disruptions.”

As for the snow removal at Ralph Wilson Stadium, the Buffalo regional office experienced an extremely high number of phone calls from people wanting to assist with the shoveling efforts. “With our permission, the Bills gave out the regional office phone number through social media which contributed to the estimated 3,000 phone calls received into the Buffalo office” said Griffin. “National media outlets also broadcast the number. Email requests for information also soared to well over 500. We received phone call inquiries from as far away as Alaska, Montana, Florida, North Carolina, Georgia, Missouri, New Jersey and New England.”

With even the most robust search engine on the planet, the[...]