Jani-King’s corporate office, regional offices and franchisees took advantage of terrific opportunities over the last year to grow their businesses. For instance, Jani-King was rated the top commercial cleaning franchise by Franchise Direct, hotel business was hot, Austin went to space, Dallas prepared for Ebola and regions across the globe created their own success stories. Let’s take a look back at some of the highlights that occurred in Jani-King in 2014.

Jani-King’s corporate office, regional offices and franchisees took advantage of terrific opportunities over the last year to grow their businesses. For instance, Jani-King was rated the top commercial cleaning franchise by Franchise Direct, hotel business was hot, Austin went to space, Dallas prepared for Ebola and regions across the globe created their own success stories. Let’s take a look back at some of the highlights that occurred in Jani-King in 2014.

Jani-King regions in California got off to a great start in January when they collectively signed 37 Western Dental locations. Through their hard work and the enormous efforts of Jani-King national accounts team, Jani-King franchisees now service 108 locations in multiple states.
In February, Jani-King’s hospitality department launched a new initiative that helped to add 70 new hotels to a growing list of hotel and resort property customers.
Also in February, Jani-King CEO and President Jerry Crawford, as well as other Jani-King representatives, travelled to Washington, DC to take part in the International Franchise Association’s (IFA) annual convention. Mr. Crawford is a key member on the IFA’s Board of Directors and his efforts, as well as those of others who participate in IFA events, are critical to the health and growth of the franchise industry. We greatly appreciate all of those who serve on boards or committees and those who are active with local, national and international IFA events.

Jani-King’s leadership from around the globe came to Dallas in March for the Jani-King Annual Conference. It was at this event that colleagues had an opportunity to network with each other and learn about new programs and technologies. Attendees were also inspired by the personal stories of several unit franchisees that attended the conference and shared their stories of success.

In April, one of Jani-King’s sponsorships was in the spotlight when the 2014 Peach Belt Conference Men’s and Women’s Basketball Tournaments presented by Jani-King was held at the Frank G. Lumpkin Center in Columbus, GA. Jani-King received exceptional regional advertising exposure through this event and continued to build its brand with colleges and universities across the nation.

Jani-King of Dallas and Fort Worth also got into the mix with one of the busiest weeks on the books. During the first week of April, franchisees and their crews for the two regions handled all of the cleaning at Globe Life Park in Arlington for a Texas Rangers baseball home series. They also successfully managed three days of cleaning at Texas Motor Speedway, including a rained out Sunday race that carried over to the following day. During this same week, the NCAA Final Four Men’s Basketball Tournament was held at AT&T Stadium in Arlington. Jani-King was once again called in to handle every cleaning need for the two semi-final games and the national championship game.

Over the next couple of months, Jani-King regional offices had some major account signings. In Montgomery, AL franchisees began servicing one of the most prestigious hotels in their market – the Renaissance Montgomery Hotel and Spa at the Convention Center. In addition to impressive guest rooms and suites, this hotel features more than 103,000 square feet of event space, an 1,800- seat performing arts center, three on-site restaurants, a world-class spa and a fitness center.

Jani-King of Mexico City signed the newest tourist attraction in their city. Located in Colonia Polanco, an upscale neighborhood that is home to gleaming office towers, and across the street from the Soumaya art museum, Aquarium Inbursa features 230 species of sea life and occupies 11,500 square feet in Mexico City. Signing a prestigious venue such as this was an important opportunity for Jani-King of Mexico City as many influential business leaders were involved in bringing the aquarium to life.
Jani-King’s healthcare division did some signing and starting of their own during the first half of 2014, including 65 Select Medical outpatient accounts located in Connecticut, Florida, Georgia, Illinois, Indiana, Missouri, Kentucky, North Carolina, Pennsylvania, Texas, and Virginia. In addition to Select Medical, Jani-King’s corporate team also closed business with United Surgical Partners International (USPI). USPI currently owns and operates more than 200 short-stay facilities where they serve more than 9,000 physicians and almost one million patients each year.
During the summer, Jani-King Brazil was awarded the contracts for cleaning the hospitality areas and VIP areas, as well as the restrooms and the terraces of five stadiums where the 2014 FIFA World Cup games were played.
More than 2,000 Jani-King team members were involved in the work and were provided special training focusing on hospitality services and stadium cleaning techniques.

The result of this huge combined effort was being presented with the Best Service Provider, award by FIFA and Match Hospitality at Maracanã, Arena das Dunas, Arena Amazônia and Arena Fonte Nova.
The second half of the year was just as exciting as the first for Jani-King. In July, the company promoted the success of its more than 40 sports partnerships and heard from master franchisees and regional office representatives on how they have been able to significantly grow their business through these partnerships.

We learned of a great story from Jani-King of Austin and how they are a partner for unique space exploration customer. At SpaceX, Jani-King franchisees work multiple shifts, cleaning the SpaceX main administration building along with the main operations building called ‘The Blockhouse’ which is the control center. Other support buildings such as Dragon Rider, Jam and Hangar are spread throughout the SpaceX compound and are under contract with Jani-King of Austin. 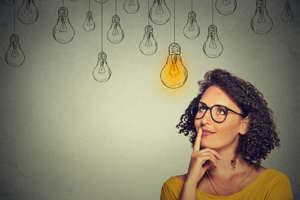 Some of the best companies were started in the middle[...] 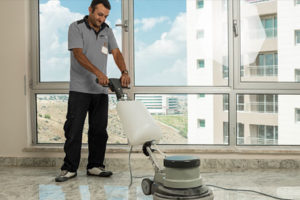 Here at Jani-King of Ottawa, we take pride in our[...] 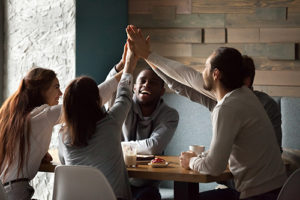 By Katie Johnston | Regional Director, Jani-King of Shreveport I[...]