There are many opportunities for personal and professional growth with Jani-King of Eastern Ontario.  Carl Fredsberg is a perfect example of someone who has grown with Jani-King and has shown his friends, family and himself his potential.

Carl began with Jani-King of Eastern Ontario in March of 2010.  He immediately shone through as someone who was able to connect with clients and put their concerns and commercial cleaning needs first.  Over a four year period he built a very happy clientele base.

The support that he received from the regional team in Eastern Ontario inspired Carl to take on the challenge of building a successful Jani-King Franchise of his own. In July of 2014 Carl and his wife Tiffany turned that inspiration into reality. They have since landed new contracts for their franchise and helped other Jani-King teams through their involvement in the community, hard work and dedication.

They were invited to attend and have a table at Vendors Day at The Bay last year.  There they were able to speak with the public on the Jani-King difference and were able to connect the regional office with a fantastic new client.

Jani-King of Eastern Ontario encouraged Carl and Tiffany to grow as individuals and as a business through training and support.  If you would like to learn how you can grow personally and professionally with Jani-King explore the franchise opportunities. 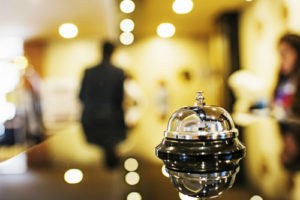 Hotels need to have great customer reviews so that they[...]