Jani-King donates $25,000 to the Canadian Red Cross with the Help of Canadians Everywhere

Jani-King in Canada launched the #JaniKingPledge campaign in early February to create awareness around the issue of disaster preparedness in Canada.

“With an increasing frequency of natural disasters occurring nationally, we strongly feel that it’s important for Canadians to be prepared,” says Murray Oxford, President of Jani-King Canada. “We wanted to advocate for the Canadian people to leave no stone unturned in the case of a disaster.”
Jani-King created a campaign website at www.JaniKingPledge.ca where Canadians can view a video and read about disaster preparedness. There are forms available to download or print out to create personal home and office disaster plans. The website will stay live even though the campaign has now reached it’s official end.
Jani-King also drove a social media awareness campaign that encouraged people to share the message of disaster preparedness. For each share, tweet or like, $20 was donated by Jani-King to the Canadian Red Cross for a total of $25,000.
Robert McNamara, General Manager for Jani-King Canada, tells us, “Over the course of the campaign, we heard increasingly positive feedback from the more than 600 communities we work in. Jani-King feels the importance of supporting one another to ensure disasters won’t leave Canadians helpless or homeless.”
The Jani-King franchisees were very active in the national campaign. Bob Bob, who runs the Halifax Jani-King franchise, stated, “What a year to be able to get involved with raising awareness of the need for disaster preparation. Here in Nova Scotia, we were battered with storms and hit astonishing snowfall records.” Calgary franchise owner Scott Scott re-iterated, “The Calgary flood last year was scary for a lot of people. There are lots of little actions that we can take to plan in the case of these emergencies. Our campaign hit home with a lot of Calgary residents for that reason.”
Long before a disaster happens, the Canadian Red Cross is always hard at work in local communities, planning for the unexpected. The organization builds relationships with local government to make sure supplies are available and accessible. Following a disaster in Canada, Red Cross workers provide vital assistance for people’s basic needs, including family reunification, emergency lodging, reception and information, emergency food and clothing, and personal services.
“Every year, thousands of Canadians are impacted by disaster. The Canadian Red Cross is grateful to Jani-King in Canada for its support of our disaster preparedness work,” responds Tom Scinto, Canadian Red Cross Development Officer. 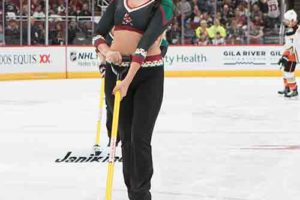 4 Years as the Official Cleaning Company of the Arizona Coyotes

Jani-King of Phoenix has been the Official Cleaning Company of[...]