Jani-King of Washington, D.C. franchisee, Jeff Davis, was honored recently by the International Franchise Association with its annual Franchisee of the Year Award. Franchise owner-operators representing 53 franchise systems were recognized last month during the IFA’s Franchise Action Network Annual Meeting, formerly the Public Affairs Conference, for their outstanding performance and the contributions they have made to enhance the growth and development of franchising.

“Mr. Davis consistently delivers superior customer service and is still servicing his very first account from 2007,” said Jerry Crawford, CEO & President of Jani-King International. “We are proud to honor Mr. Davis for his efforts and dedication to growing his Jani-King franchise.”

“The strength of the U.S. economy significantly relies on the hard work of franchisees,” said IFA Executive Vice President of Government Relations & Public Policy Robert Cresanti. “IFA is proud to recognize the outstanding efforts of Jeff with the Franchisee of the Year Award and thank him for his work in the promotion of franchising as well as for his daily contributions that not only showcase how local business owners propel the economy, but also foster community ties throughout the U.S.”

The Franchisee of the Year Award is a major component of the IFA’s Franchise Action Network Annual Meeting, which brings more than 400 franchise business leaders together in Washington, D.C. to carry the key messages of franchising to lawmakers on Capitol Hill. During the two-day event, which began Sept. 28 and continued through Sept. 30, franchise industry leaders met with over 200 congressional offices about issues important to the future of franchising, including specifically labor and workforce issues. The Franchise Action Network is a powerful tool to help forward IFA’s advocacy efforts and further increase awareness about how franchising can contribute to economic recovery and job growth and educate lawmakers how franchise businesses contribute to their local communities. 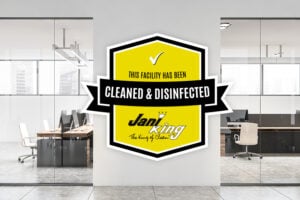 Jani-King Of Cleveland Is Proud To Be A Sponsor For The Pro Football Hall Of Fame’s “Excellence, A Conscious Pursuit”

Jani-King Of Cleveland Is Proud To Be A Sponsor For[...]