Jani-King of Baton Rouge puts a wrap on the 2016 Baseball Season at Alex Box Stadium.

Two years ago, Baton Rouge Franchise Owners Terry Brown and his wife Dorothy looked out at the expansive stands in LSU’s Alex Box Stadium and asked themselves,

what have we gotten ourselves into

Two full seasons into cleaning Alex Box Stadium, there are many nights that the Browns look at each other and still ask the same questions, but they know when it’s all said and done they can stand in that same spot of the stadium and say,

look what we did! 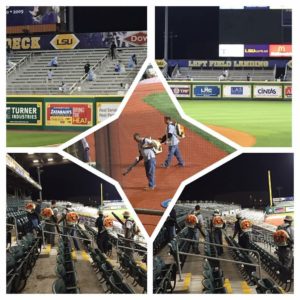 LSU Baseball has one of the most rabid fan followings in all of college baseball. In the 2016 season, Terry and Dorothy cleaned up behind 433,783 people. That is an average of 10,580 people per game. Needless to say that’s a whole lot of peanuts, popcorn, and cracker jacks to sweep up. How do they do it? “Teamwork and organization” says Terry. “We have to have all 20 to 30 people per night working together to accomplish our goal.” That goal is to have Alex Box looking good as new for the next night’s game. That is the standard for the LSU Facilities Department and their fans. Terry, Dorothy and their team delivered night after night for the past 4 months.

The Browns and their team are faced with many challenges each game; lightning and rain storms, to long nights after game delays. They met each games challenge head on with the enthusiasm that has helped grow their franchise to one of the largest in the Baton Rouge Region. While the LSU Baseball team may not have reached their goal of making it to the College World Series, Terry and Dorothy are reaching their goals every day in growing their franchise and carrying the Jani-King flag with pride.

Xavier Continues to Overcome Hurricane Katrina with the Help of[...] 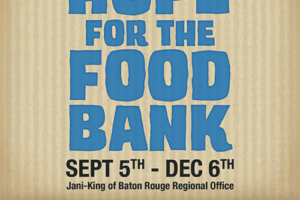 During tough times, a community tends to rely on certain[...]

Jani-King and the Secret to a Dust Free Day